You are here: Home / News / moonbeams3

So much inspiration, wonder and chatting with like-minded souls – exhausting!

There were plenty of highlights but if I had to name just one it would have to be the performance of ‘One small word’ by M6 Theatre Company. A sensitive,well observed portrayal of the ups & downs of child friendships…..and so much more –  Magical!

Thanks to ﻿Earlyarts, moonbeams3, and MACfor putting on a brilliant event….and thank you to the lovely people who attended my clay workshopon the Wednesday. Such creative making in so little time. 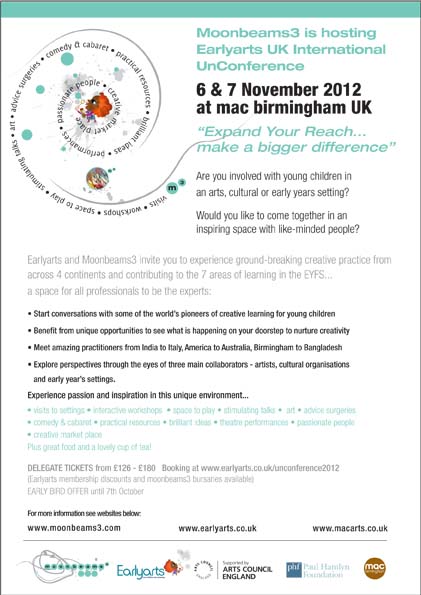 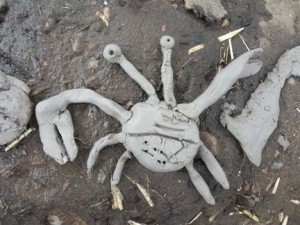 Oh muddyducks!! It was my final http://moonbeams3.com/ stint at the Midlands Arts Centre last week and the land art mud sculptures hadn’t fared too well since I’d last seen them.

The persistent heavy down pours had washed away a lot of the mud/straw feathers  and numerous little feet had enjoyed climbing up and down their backs. The works looked a little sorry for themselves. Not that the first group of nursery school children who came especially to work with me thought so – they were completely captivated by the x3 lumps of mud and immediately saddled up, two abreast, and enjoyed a morning of horse racing! “Giddy up horsie!”

Once everybody had had a ride on the horseducks, we settled into making clay sea creatures to adorn the mud boat. 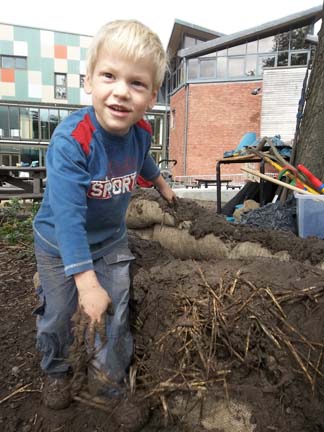 I’ve thoroughly enjoyed my ten days working on @moonbeams_3 this Summer. The first five sessions were spent indoors as a ‘pop-up potter’ working with early years groups and individuals on the potter’s wheel. One week I’d be in the hub, the following in the cafe area assisting very young artists with their clay making.

The arrival of the the school holidays heralded a new, even more messier approach – namely mud sculpture outside on the terrace. The young people worked alongside their significant adults and the collaborative atmosphere has been alive with animated conversation. So many benefits for language development, social interaction and hands on, learning about natural materials. Oh, we had a shed load of fun too!

I’ve met so many lovely people and creative souls, some of whom returned on numerous occasions to sample the clay & mud mayhem. Here’s just a few comments & observations:

Kitty’s mum – “The very next day after the potter’s wheel workshop at mac, we saw a shiny new potter’s wheel in a charity shop – £2!!! – she loves it!”

Alison (adult) – “Absolutely fantastic, this is a cracking idea!”

Conversation between x2 young participants: – A:“I’ve got this, it’s a gardening fork” B: “no it’s not, it’s a mud fork – you know what, I need more mud, get a spade mum!”

Various comments from the children: “I’ve never played with mud until today” “All I like is art – that’s all” I like, would like a different material to create an effect” “If my friend stayed he could have made a duck with me but he’s having a washing machine” “It’s the parts of my clay I used earlier and it’s dried up” “We’re just mixing water into it to get all the bits away” “Clay is a freestyle thing” “They’re not birds they’re ducks!” “It’s a bit tough, it needs more water” “Make a hole where the power goes, it’s a speed boat” “It wont really move, it’s mud – why don’t you use concrete?” I’m getting messy hand, I’m going to get the messiest hands ever!” “I’m decorating”

D’s story: (pictured above) Whilst banging the hazel pegs into the sandbags with a mallet, ‘D’ and myself were having a conversation about where the sticks had come from. I told him I’d cut them from a hedge near my home in Herefordshire. Having struggled with an awkward and particularly bent peg he turned to me and with some indignation and exclaimed “why did you collect this one then?”

‘D’ really enjoyed the whole process of making the muddy boat and was able to relate it directly to his experience of working at home with his dad in the house and garden. Whilst leaning on his shovel taking a well earned break: “We’ve built a house – done the bathroom, done the kitchen, done the bedroom and done in another bedroom, when it’s all done I’ll come back here and tell you about it all” 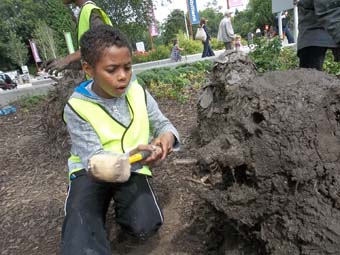 Some structural repair to muddy duck No.3 taking place at the Midlands Arts Centre in Birmingham. We’re averaging a duck a day on our moonbeams3 mud sculpture drop-in project with well over 300 young children and their families taking part so far.

We’ve ordered another ton of mud and intend to build a mud boat on the 7th and 22nd of August.