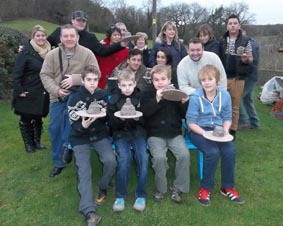 This family had a Christmas get-together in Herefordshire. Part of their festive plans involved a spot of creative, clay play here at Eastnor Pottery.

Although three generations were represented, the making was the responsibiliy of the young people – the older family members spectated, taking great delight in what the potters made.

Clay highlights included a piggybank, lantern and a spongebob house!

If you and your family would like a morning or afternoon of pottery fun then please take a look at our family and friends sessions. 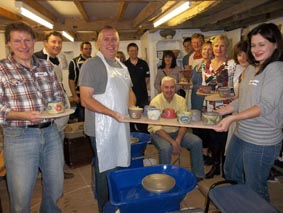 We do our fair share of children’s birthday parties here at Eastnor Pottery. However, on saturday we had the pleasure of hosting a ‘grown up’ pottery party for Andy and his guests. Apparently, Andy was celebrating his 60th birthday, although he could have quite easily passed the event off as his 50th (what’s your secret Andy?!) and wanted to treat his guests to a unique experience – something really different.

No less than 19 party goers enjoyed making pots on the potter’s wheel as well as constructing and painting some pretty cool coil pots.

Some of the group were under the impression the three hour workshop was purely a clay experience and the only thing they would be making was a mess! They were genuinely surprised at their creative clay outpourings and thrilled at the prospect of recieving ceramic keep sakes in a few weeks time. Have a look at the results in our Facebook album.

If you have something to celebrate or comemorate as a clay experience please contact the Pottery. Tel 01531 633886 or email admin@eastnorpottery.co.uk 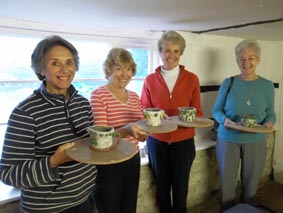 Four friends from Ledbury took advantage of our ‘friends and family’ workshop option. The ladies made some striking coil-pots which will be fired, glazed and ready for collection from Eastnor Pottery in a few weeks time. 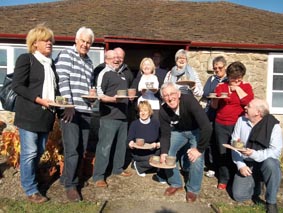