You are here: Home / News / evesham 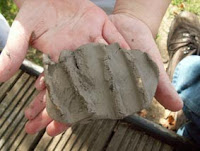 It was such a lovely sunny day we decided to take the clay outside. The children squashed clay into and onto all kinds of different surfaces to make richly textured blobs. We then took the little nuggets inside and press-moulded them together to make decorative plates. The pieces are currently exhibited at the annual Voices and Visions showcase in Worcester Cathedral, see here for more information: http://www.voicesandvisions.org.uk/ The show runs till 28th June 2010.

Emilie coiled this pot and then spent half an hour sticking these little clay balls onto the surface, displaying making skills far in advance of her years.

It was lovely to resume my residency at Evesham Nursery again this week. The new intake responded well to the Potter’s wheel, each child spending time chatting and creating special mugs and cups. There are always one or two that will quite happily spend the whole session exploring the clay and tools on offer – such focus and concentration from people so young never ceases to amaze me.

Followers of this blog may have seen the Evesham Bread Oven entry for Thursday 14th May? This week I returned to the forest with the children to make and bake pitta bread in the oven.

The structure had dried out perfectly although the base bricks felt a little damp. Before building and lighting the fire I ran my hands around inside the cavern to see if the dampness would hinder the bake. My fingers brushed up against something cool and soft…and moving – seconds later a large toad (rather disgruntled from having been disturbed) crawled through the oven door and hopped into the undergrowth -phew, lucky I checked before firing!
So as well as rolling dough, baking and eating fresh pitta – the children were fortunate to experience a real live toad too!

One of the things I really cherish about working with the staff at Evesham Nursery, is their willingness to allow me to experiment with new ideas. I’d never made a clay bread oven before, but having expressed an interest in building one, the head embraced the idea with enthusiasm. So it was I spent two fabulous spring days with the children in the Nursery’s forest school, digging earth, mixing cob, shaping bricks and generally having a messy nice time!

On day two we lit small fires in the oven to help dry it out. Whilst the oven smoked quietly, we built another fire in base camp, and smoke fired some of the pots the children had made previously on the potter’s wheel…and some people have to work for a living!