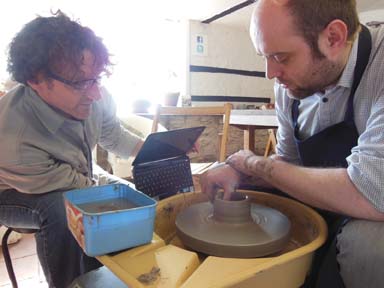 Ash and Dom are Ludicrooms and they seek to transform spaces through technology and play.

In their wisdom and enthusiasm they thought it a grand idea to allow six or so artists and makers to tinker around with their digital wizardry and knowhow.

The project was called Random String.

I was lucky enough to be one of the chosen six and spent the majority of February messing around with makey makey’s, raspberry pi’s and servos. (No, I didn’t either till I met Ash & Dom!) We were all encouraged to contribute to a blog mapping our journeys.

Perhaps the most inspiring thing for me was learning how to record and manipulate sound generated from my musical pots. I even managed to set up a soundcloud and posted some very short and raw sonic experiments. Have a listen!

Having just tickled the surface of what’s possible I’d love to spend a period of total emersion exploring the myriad of posibilities of sound and clay – like thats really going to happen!

Random String culminated in a symposium held at the Warwick Arts Centre, Coventry  on the 7th March 2014. 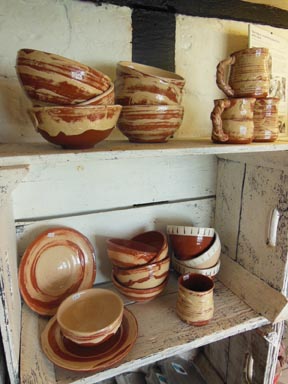 Apprentice Ethan has been busy fine tuning his throwing technique and making some lovely objects in the process.

Rather than squashing all the trial pieces, we’ve been encouraging him to decorate and follow through the firing and glazing process.

Featured left are a selection of earthenware bowls, mugs and jugs on sale from the Pottery for as little as ten pounds. 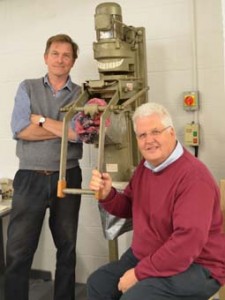 Big thank you to Stuart & Peter who kindly fired my porcelain play things destined for Craftplay at Bilston Craft Gallery in Woverhampton.

Our kilns here at Eastnor Pottery Central would have really struggled to reach the temperatures required to vitrify the white stuff. I was very grateful the chaps at Belatrova were able to come to my aid and offer space in their kilns.

Stuart makes a fantastic range of hand thrown porcelain as well as being one half of Belatrova, a design partnership set up with artist Peter Arscott.

Although I havent worked in porcelain for near on 22 years, its durable constitution made it the perfect material choice for the Happy Museums Commission. The pots have been delivered and are being well loved by Bilston’s under 5’s and their families! 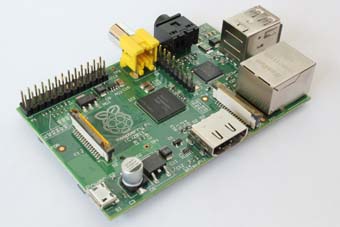 Been learning all about these little fellas as part of the Random String project initiated by those cool dudes at LudicRooms in Coventry.

So, so excited about this project looking at how creative technologies can further develop artist’s practice.

There is a blog myself and the other 5 artists will be contributing to over the coming months. 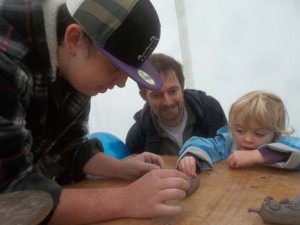 Amazingly he’s been here a month already so it’s high time we say a very warm ‘WELCOME!’ to Ethan, our newest member of the Eastnor Pottery team. Ethan will be spending the next 12 months as a Community Artist Apprentice, accompanying us on our all our sessions out & about as well as assisting with our recreational pottery sessions here at the studio.

We’ve packed so much already into the past 4 weeks with arts projects in Ledbury, Hereford and Wolverhampton to name but three. As well as helping out at these workshops Ethan has been busy taking documentary notes & photos as well as learning about the day to day running of a small creative enterprise. He’s also gained a wealth of pottery skills which in time, he’ll share with our customers and participants. Oh yes, he’s proved himself a bit of a whizz on the potter’s wheel too.

Ethan came to us via Creative Alliance who will be monitoring his progress and setting him the appropriate assignments in order for him to gain his level 3 Community Artist qualification. The position is part funded by the Creative and Cultural Skills agency.