A few weeks back we were contacted by a young videographer and photographer called George Nash. He asked if he could visit to shoot some footage to add to his burgeoning portfolio of photographs and moving image.

We were instantly struck by the professionalism of his approach and the initiative he’d demonstrated in doing so.

George spent a busy Saturday morning in March with us filming and photographing our customers and staff in action. He also brought along his drone to get a bird’s eye view of the Pottery and surrounding Herefordshire landscape.

George was very easy to work with, putting ourselves and more importantly our customers at ease as he moved around the studio, capturing large and small interactions. He demonstrated a really good eye for composition and worked very hard to capture the ‘right’ images.

We are so impressed not only with the results, but the speed in which he delivered the finished work. We think he’s captured the vibe and environment we strive for perfectly. Well done George!

George can be contacted on all the usual social media platforms: 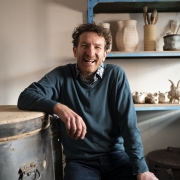 One small step up & running!

Young Farmers get creative with mud