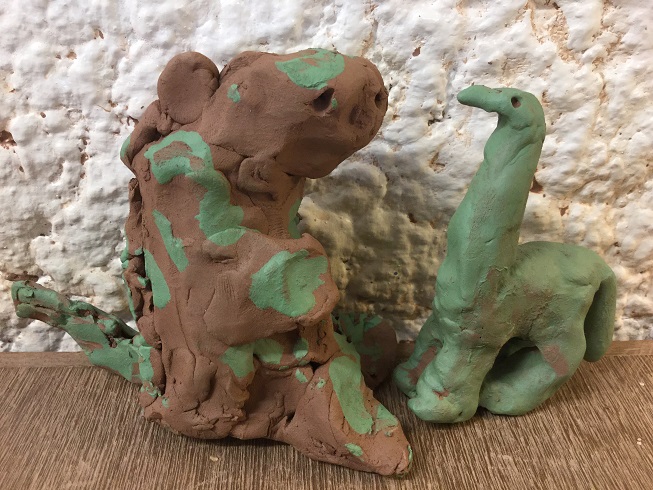 Jon worked with the two Reception classes at Woodlands Infant School in Shirley earlier this week. The four and five year old pupils have been studying dinosaurs as part of their learning and were really really excited about making their own pottery creation.

Making clay dinosaurs has to be one of our favourite themes of all time. Probably, in part something to do with our son’s obsession with all things Jurassic when he was a youngster.

The children used the simple technique of sticking two pinch-pot bowls together to make a hollow structure. Next they fashioned their hollow ball, without breaking the seal into a dinosaur of their choosing, using an additional lump of clay to make legs, spikes, horns etc.

As well as learning new clay skills the children also used lots of new words and vocabulary to express what they were doing. Here are just a few snippets of conversation with their teacher after they had completed the activity:

“I was going to make a T-Rex but I changing my mind. The Slytherin [painted slip!] was the best bit – it makes it look shiny”

“I made a T-Rex, I made the mouth wider”

“I found it easy doing the body. I made the tail a bit lumpy and a bit short”

“I made a theradactile it had wings – I rolled them”

“The spikes was tricky, I tried to flatten it and stick it on”