I’m looking to sell all the exhibits from my solo, touring exhibition ‘Sensational Clay’ at a one off event – The Garden Festival at Bilston Craft Gallery in the West Midlands.

I’ll be offering all the pieces at a fraction of their original value, in fact everything will be priced between a bargain £5 and £30 – everything must go!

For those who didn’t have the opportunity to visit the exhibition in one of five venues across the West Midlands and beyond, missed out on an extravaganza of fired ceramic designed to stimulate the five senses. All the exhibits were made with visitor interaction in mind and as well as being accessible to touch, there were aromatic pieces, musical rattle pots and sculptural curios inspired by food and drink.

Sensational Clay was first exhibited at Bilston Craft Gallery in the Summer of 2011. The show proved so popular with  it’s intended family audience, the Gallery suggested it be offered to other venues as a touring resource. It went on to be exhibited at New Brewery Arts in Cirencester, Tulie House Museum & Art gallery in Carslile, Worcester City Museum & Art Gallery before it’s last outing at Leamington Spa Art Gallery in Warwickshire.

The Garden Festival starts at 2pm and is due to finish at 5pm but do hurry as the work won’t be around for long! 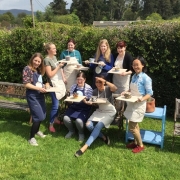 Blue is the colour

How to make pottery videos