News
You are here: Home / News / children / birthday parties / The tale of the AWOL pottery tortoise! 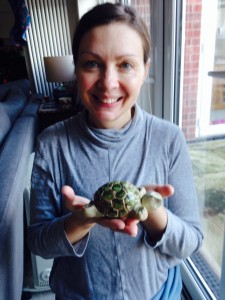 Back in the Summer during a particularly busy period, we somehow managed to muddle up a couple of customers fired pieces. A family from Worcester were disappointed to find one of their pottery pieces had morphed from a tortoise into a little brown owl.

After a process of elimination, we’d worked out the swap had occured with a large hen party who had made a menagerie of different creatures. After a succession of emails and a period of 6 months the tortoise was returned to the Pottery by one of the hens who was able to give a detailed account of the tortoise’s journey:

“He has been fired, been to a country wedding in Leominster, spent 4 months living in Birmingham with some newly weds and a rugby player, was taken on holiday to the Norfolk Broads then spent a week in a farmhouse in North Wales before being left in a box wrapped in bubble paper back at Eastnor. What an adventure for a tortoise so young! Maybe he should write a book.”

Maybe he should! Anyway, I’m pleased to report that maker and tortoise have finaly been reunited. (featured photo)