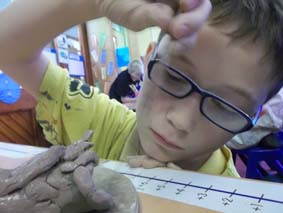 Spent a lovely day at St Peter’s Primary School in Bromyard working with Yr4 & 5 – Canopic jars with Yr4 and space aliens with Yr5.

After the customary potter’s wheel demo, we used a simple ‘pinch-pot’ technique to make hollow forms for the alien’s bodies. The children moulded and added to the structure with incredibly creative & imaginative results – each space monster a unique and different creation. Here are a few photos illustrating the diversity of approach.

The vocabulary and language used was extraordinary and quite poetic at times. One pupil thought the spinning clay on the potter’s wheel was like “exploding cappuccino”

One child was particularly inspired by the process and created a great narrative on his clay journey:

Lego city alien invasion “I got the idea from a video on YouTube. I’m trying to make an alien worm. If I have any extra clay I’ll make some tongues so it can eat it’s prey…two eyes so it can see where it’s going, little eyes and then a big hole with lots of tongues so it can stretch, grab something and then eat it!..he’s got scratches on him where enemies have attacked him and stuff. When I get mine home I’m going to put my Lego man inside and then take a photo” 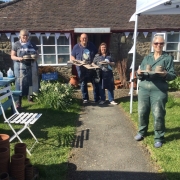 Flying Potter lands in the Castle!