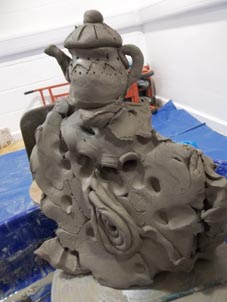 Moonbeams (how to catch a moonbeam and pin it down) is an ongoing arts project celebrating early years creativity in Birmingham. The project has been up and running for near on 11 years and is currently in it’s third phase – moonbeams3.

It’s been a privilege and a pleasure to have spent the last couple of days working with nurseries and early years groups at MAC at Cannon Hill Park as part of moombeams3.

The young artists have been working on the potter’s wheel, making a fantastic range of shapes and forms – often manipulated, added to or squashed to achieve an effect.

And this is the best bit  – once the children have finished their creations they get to carry (v-carefully)their clay sculptures to a specially designed set of shelves in the Allotment gallery space at the MAC publicly on show for the rest of the summer.

Moonbeams3 is on show at MAC till the 9th September 2012.