Close on sixty Yr 3 pupils from Bishops Cleeve Primary School collaborated to make an army of terracotta Roman soldiers. The children worked in threes to produce the 20 clay figures – one made the head, one made the torso and the other constructed the legs.

The body parts were then joined together, each figure standing roughly 25cms in height.

The results look fabulous and will be further enhanced by a terracotta firing in our kilns. Once emerged from the firing process the figures will be returned to the school to be displayed in the School entrance on specially constructed shelves….To see the completed, fired Roman legion of soldiers, have a look at our Facebook album. 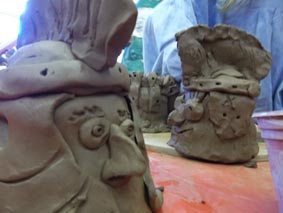