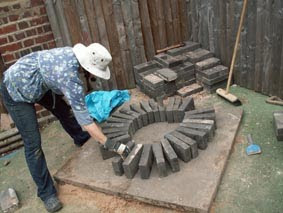 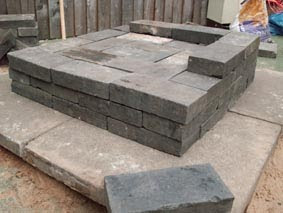 Another day, another inspirational Birmingham Nursery!
Jon got the chance to join forces with Washwood Heath Nursery’s resident forest school artist Fiona Hopkins. The pair had planned to build a pizza oven for the children to cook flat breads; and Friday provided the first opportunity to start work on the structure. Fiona had secured some beautiful reclaimed bricks which were fashioned into the stand. This activity took the majority of the day, what with moving, stacking, and admiring the aesthetics of the bricks!
The oven is being constructed in the outside play space so there was a constant audience of inquisitive youngsters. Jon and Fiona were kept busy answering a hundred questions and ensuring the children didn’t stray too close.
The next stage is to make the oven – a messy business indeed, but one that the children will be able to engage in fully.

Welland Primary Animals
How to Wear Your Clay!
Tree of life is up
Clay babies revisited
Pottery tree for Leigh
Home & away for Snodsbury
Dinos & Dragons
Trees under wraps